An excerpt from ‘Quite Courage of the Inner Light’ by Philip Pegler.

Life often appears to be utterly unsparing in its demands, but sometimes it does seem that hard knocks are needed to incline someone towards a life of greater faith, or more complete integrity.

Who can possibly say what might be required in any situation, to bring about this marked shift in a person’s attitude – a real change of heart? But often it is sudden trauma that tips the balance to bring about a vital change of direction and a radically fresh perspective. Losing a valued job, the breakdown of a cherished relationship, or the immense sadness of sudden bereavement – all of these are surely good enough reasons for depression, if not despair.

No facile explanation can ever satisfy an anguished demand for a proper answer to life’s unbearable dilemmas, but sometimes one knows from one’s own experience, that a stringent remedy in the form of a crisis, may be the only thing that will bring someone to their senses – if they have been pursuing what is clearly a mistaken or deeply damaging path for them or society.

Upheavals or reverses in fortune in life are never punishments as such, but they can represent a tough teaching, because it is never easy to witness the demolition of one’s resistance to the ongoing flow of events, which happen not to be to our liking.

I have previously written extensively about the healing power of pain, and I remain thoroughly convinced of the veracity of this approach that suggests that we often learn more effectively through difficulty than through ease.

The tipping point in my own life occurred without warning in early adulthood, when a promising career in the caring professions was abruptly cut short by a psychiatric breakdown.

I became seriously disturbed after a love affair with a fellow student had broken up in the middle of our nurse training.

I was exceptionally vulnerable at that point – and some understandable reasons were not far to find. I had been devastated by the premature death of my mother from cancer eight years earlier when I had just come of age; in addition – in common with many of my contemporaries in the 1960s – heedless sampling of psychedelic drugs around that time had left me susceptible to psychological problems.

And there was one more factor that had considerable bearing on my over-sensitive state of mind. I had recently returned from extensive travels in India where I had gone in quest of Truth. I had been exposed to rough living conditions and my physical health had been compromised; it would have been an unsettling time of transition for anyone.

I soon recovered from this initial breakdown, but I remained subject to periodic bouts of psychiatric instability for many years to come – although I was fine in between and continued to work normally in my new profession as an antiquarian bookseller.

I am thoroughly convinced that the psychiatric disturbances to which I had apparently become so liable, were closely connected with my intense, spiritual seeking, which was putting my sensitive nervous system under intolerable strain. Conventional medical opinion remains far from accepting such an alternative view of so-called mental illness, but the weight of evidence supports this far more compassionate approach to mental and emotional turmoil.

A counsel of perfection is always out of place, but it is obvious that without being completely honest with oneself, it is hardly possible to approach absolute integrity – through which one becomes completely straightforward and can appear fully trustworthy in the eyes of others too.

If you look closely enough, you will always get an immediate sense of whatever may have seriously gone amiss in your affairs.

To retain a realistic awareness of one’s deficiencies – to have a wounding knowledge of oneself – is one of the most valuable assets to be kept in reserve for when one is most under pressure.

And this is because, a genuine admission of where one may have gone wrong in one’s life, paves the way for profound renewal and makes a process of deep healing possible – despite how terrible things may still appear to be on the surface.

The most significant turning point for me personally, was the time I fully accepted what for me at that stage in my life, was the worst outcome possible – the loss of a career opportunity I had set my heart upon.

The key moment of release came the very second that I said ‘yes’ to the bitter disappointment I had undergone. It was one of the hardest choices, I had ever had to make. But something magically cleared deep within me then, and I could carry on at peace with whatever came next – no matter what it happened to be.

As later life unfolded, I gradually came to see that a tipping point need not remain confined to examples of personal crisis, but indeed refers to the entire world. A pioneering, contemporary teacher of mindfulness is Jon Kabatt Zinn. He writes most succinctly as follows about this very subject in his excellent book Coming to Our Senses:

You don’t necessarily have to surrender your life to bear witness to injustice and suffering. The more bearing witness while dwelling in open-hearted awareness becomes a way of life for all of us, the more the world will shift, because the world itself is none other than us. But it is sometimes, more often than not, a long slow process, the work of generations. And yet, at times, a tipping point is reached that could not be predicted even one moment before. And then things shift, rotate, transform – and very quickly. 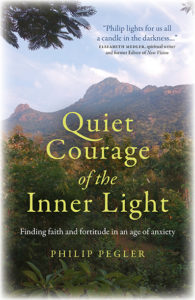